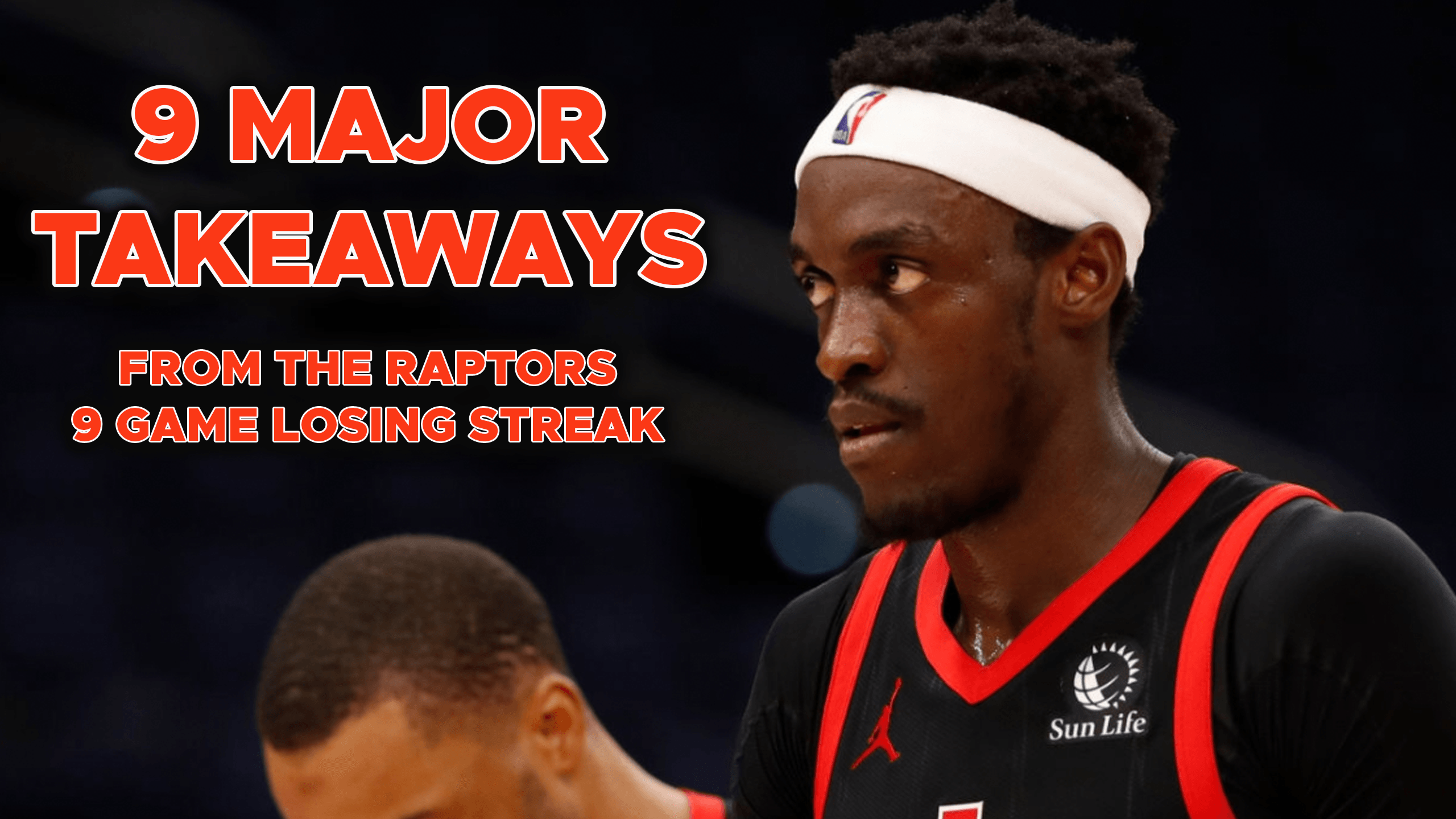 The Toronto Raptors have been one of the NBA’s benchmarks for sustained success over the past 7 years. A trend-setting G-League led development system, an elite coaching staff and culture, and one of the best presidents in modern basketball has created this overwhlemingly positive association with the franchise. It's unfortunate that given all this, 9 games seem to have deteriorated it all.

Let’s face it - the Raptors are playing poorly. In fact, they might be in the worst form of any NBA franchise right now. But losses are an opportunity for learning, right? So let’s go through 9 takeaways from this 9 game slide.

Powell is amidst a career defining season. The 27 year old guard is blossoming into his prime, averaging 26.2 points a night over this losing stretch. The former 2nd round pick has been a star product of the Raptors development system, and is undoubtedly a fan favourite in his 6th season with the club. His 3 point stroke has finally found some consistency (a ridiculous 43.4% on the season), and he’s chipped in almost 20 points/night all year. Expect Normgod to get paid upwards of $20 million/year in free agency this offseason, or to get offloaded in the next few days.

Listen, I mean no disrespect to any Tampa or Florida residents,but Tampa sucks. The Raptors never look comfortable at “home”, are seemingly always tired and slow-footed, and just don’t seem like they want to be there. The Raptors culture is defined by its Toronto roots, presence, and most importantly support, and missing that has surely been tough for everyone involved.

3) Pandemics make basketball harder (but that's not the only issue).

Alright, this one’s a bit of a gimme. Pivotal to the Raptor’s diminishing run is the fact that we’ve missed countless players and coaches to health and safety protocols. Missing out on multiple starters and key players for such an extensive run obviously makes winning basketball games much more difficult - it’s a shame we kept losing when everyone was healthy again, because the excuses became much harder to locate.

A spicy take for Spicy P. Don’t get wrong, I’m no Siakam hater. I fondly remember the days where he was hitting spin moves in the finals and driving on Joel Embiid like he had no worries in the world. It pains me to the core that this season he’s performing about as well as the stock market in 2008, but it doesn’t change the fact that it’s true. I can count on one hand the amount of games Pascal has looked comfortable in this season. Teams have learned how to play him defensively, and if he can’t get the 3 to fall at a respectable rate he simply cannot be an efficient scorer (never mind the first option). He’s looked a shadow of his former defensive self without Serge Ibaka behind him, and has developed a disheartening relationship with Nick Nurse (more on that later). Pascal has been utterly disappointing this season, and that’s been perfectly exemplified in his recent play.

Some nights I think Kyle Lowry is an elite point guard. Some nights he’s -25 against the Houston Rockets on a 20 game losing streak. He’s proven to be an efficient scorer and a great 2nd or 3rd option on a competing team, but he's also proven that the clock is no longer on his side. Lowry is undeniably the backbone of this team, but the team has been looking pretty spineless lately. Some emerging trade talk suggests the Raptors are looking for 2 first round picks, 1 second round pick, and 2 players in a trade for the 34 year old - if Masai can pull that off, I would run with it. The impending doom of basketball purgatory is hanging over us, and if offloading Lowry can give us that much of a shortcut, I think it would be abysmal business to avoid it.

I'm hesitant to say Nick Nurse is overrated, because I think he’s one of the best coaches in basketball right now. His defensive ingenuity quite literally won the Raptors a championship, so chalking up 9 consecutive losses to Nurse seems unfair. It's equally unfair to assume a team can lose 9 games in a row and the coach deserves no blame. A boatload of missing players means it's been hard for Nurse to adapt to losing out on Ibaka and Gasol in free agency last offseason, however, the team has been virtually unable to present any defensive challenges to an opponent over this losing stretch. Nurse’s famous defensive versatility is seemingly out the window, and the constantly switching small ball lineup simply isn’t working well enough. If we can’t stop teams like Houston and Cleveland from getting open shots, I don’t even want to imagine playing the Nets or Sixers in the first round.

Some math for all the students reading: what do you get when you combine a disgruntled star with a coach willing to bench him? The surprising answer - lots of fines. First Siakam gets benched for disciplinary reasons a few months back - clearly, he’s been frustrated with the team's struggles. Nurse has been growing increasingly impatient and is also visibly frustrated, most recently throwing his mask at the end of a game. Combine that with cursing at a referee and you get a $50k fine - fair enough. Siakam earned himself an equally hefty bill from the organization for the apparently outrageous insults he directed towards Nurse after being benched late against the Cavs (although this is yet to be confirmed by the organization). This decaying relationship between Nurse and Siakam is disgruntling, to say the least.

8) We’re Not in Kansas Anymore.

This is uncharted territory. The Raptors’ recent success is their own worst nightmare right now. When you’ve spent so long fine tuning the skills of how to climb a mountain, you may have forgotten how to climb out of the hole you started in. Well, the Raptors are in quite the hole right now, and thus far it seems like their only solution has been to dig deeper. The Raptors definitely need to remember how to get gritty and win some games, but losing is not the only new addition for the team. Locker room problems and unsatisfied egos are truly a brand new chapter for most of the roster (Nick Nurse included), so getting through this patch is absolutely vital if the team wants anything to do with the playoffs.

9) Something has to change.

I’m not usually one to draw conclusions so quickly, but the truth is that the Raptors aren’t good enough to compete anymore with the current roster. If we could take this team into next season while retaining the capacity to address front court weaknesses, I’d be all in. Unfortunately, with Lowry and Powell off the books this summer, we won’t be able to retain them both while also investing in a big. My personal approach - trade Lowry if we can get some first-round picks or young talen (perhaps Duncan Robinson, Precious Achiuwa, and/or Kendrick Nunn from Miami). Ship out Norm for a 4/5 under contract (a trade centered around Powell and Kristaps Porzingis seems to be an enticing option), or keep him and look for a sign-and-trade in the summer.

The Raptors don’t need a rebuild, they need a remodelling. The core of Siakam, VanVleet, and Anunoby under contract is great, and getting a good pick, making some good trades with expiring contracts, and putting it all back together again in a 2 year turn-around seems very possible. We’ll have to wait and see what path Masai ultimately chooses for the franchise, but the upcoming trade deadline is sure to reveal his plans.

What do you agree or disagree with? How can the Raptors snap out of this poor form?

Let us know what you think in the comments!